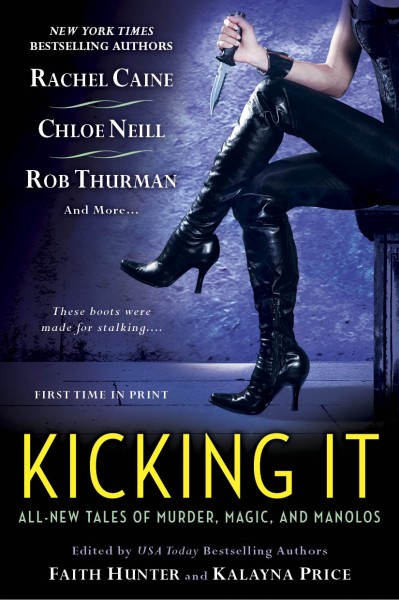 Luc stood in front of me in my smallish dorm room in Cadogan House holding a glossy black shoebox and a pair of the sexiest boots I’d ever seen. Nearly knee-high, buttery black leather with pointy toes and stiletto heels long and thin enough to be weapons on their own.

I stared down at them with obvious lust, but kept my arms crossed and my fingers away from leather I knew would be smooth as silk. “You bought me boots,” I said, for the fourth time.

“If the shoe fits,” Luc said with a crooked grin, which was just as effective as the curls.

He gave me a flat look. “Since when did that stop you from buying anything? You have five pairs of black heels.”

“And I’ve explained this a hundred times.” I counted them off on my fingers. “Stilettos, kitten heels, patent, round toe, open toe. A girl needs options.”

“The point is,” he said, “I don’t care if you need the boots. I just want to see you in them. And clothes are completely optional.”

“But you didn’t need to buy me anything.”

“It’s not about need,” he said. “It’s about want. I wanted to buy them for you, so I bought them for you. There’s no expectation, Linds.”

I knew he was telling the truth. It was clear in his expression, in his magic, in the way he looked at me.

I was gifted—or cursed, depending on your perspective—with empathy. It was a rare gift for a vampire, and not always a welcome one. Every bad mood in the House leaked into my subconscious, and I’d had to learn to filter out others’ emotions or risk them overwhelming me.

So, yeah, Luc was being honest, and I could tell.

But it wasn’t that simple.

He smiled cockily down at me. “I’m not afraid of your issues, Linds.”

“I don’t have issues,” I said. “And we need to get downstairs. Maybe we should talk about this later.”

“You’re a walking issue,” Luc said, nipping at my earlobe before releasing me. “Fortunately, you’re also a hottie and a very good guard.”

He shrugged carelessly, obviously trying to rile me up. “You’re all right.” He walked to the door, opened it, and gestured into the hallway. “Let’s go.”

Cadogan House was several stories of European opulence and vampire drama. Situated in the Hyde Park neighborhood of Chicago, it was home to nearly ninety vampires. Or more accurately, ninety vampires and the psychic stew they cooked up on a nightly basis. Their happiness, their sadness. Their angst. Their fear. I lived in a cauldron of vampire emotions, in a neighborhood of human emotions, in the third-largest city in the country.

Collectively, there were a lot of emotions out there.

I’d been a vampire long enough that I’d learned to turn down the volume, but each person’s mood still bobbed like a buoy in my brain. Little tricks kept me sane. For lack of a better word, “stuff” helped filter out the extra noise. That’s why my room looked like I’d been hoarding souvenirs from my hundred and fifteen years as a vampire. The knickknacks, pillows, posters, and other odds and ends worked like insulation, which was also the reason I spent so much time in the House basement.

Granted, I worked down there, too, but that was mostly a coincidence.

The first floor of the House held the offices and public rooms, and the second and third floors were mostly the dorm. But the basement was where the magic happened. Luc’s Operations Room was there, as were the old-fashioned, wood-paneled training room and, my personal favorite, the House arsenal. Weapons galore . . . and even more insulation.

Luc and I headed into the training room. The other official guards, Kelley and Juliet, were already there and stretching for a workout, with Merit, the House Sentinel. She wasn’t a guard per se, but the job was close enough that she trained with the rest of us. Merit was a relative newbie to the world of vampires—only ten months out. She was finding her place as Sentinel—and as the Master, Ethan Sullivan’s, girlfriend—but she was still learning the moves. She’d picked up the moves of vampire swordfighting remarkably quickly, probably the perfect mix of Ethan’s vamp-genetics—transmitted when he changed her from human to vampire—and her dance training.

Ethan was also already in the room, shirt off and wearing the same martial arts–style black pants that Luc favored. While Merit, Juliet, and Kelley sat on the edge of the woven tatami mats that covered the floor, Ethan stood in the middle, stretching his arms over his head, flat stomach and abs tensing as he moved.

I couldn’t fault Merit for her taste in men. Ethan was tall, blond, gorgeous, and imperious as fuck. I appreciated the first three, but preferred a little less control freak in my relationships.

Luc slapped me on the ass and stepped onto the mats. “Eyes on the prize, sunshine.”

I rolled my eyes and took a seat beside Merit. With long dark hair and a fringe of bangs across her forehead, she was pretty in an almost old-fashioned way. Regally so, like a princess from a different time. It was probably appropriate that she’d been studying medieval literature before Ethan made her a vampire.

“You did good, you know,” I said, gesturing toward Ethan.

“Oh, I know,” she said. “He reminds me at every opportunity. And with much detail.”

Apparently not to be outdone by Ethan, Luc unbelted his martial arts–style jacket and dropped it to the floor, revealing that perfect fuzzy chest, the very bitable nipples, and the lines of muscle at the base of his hips that ached for roaming fingertips.

I gave him a hard time. I knew it. We’d been friends for a very long time, and I didn’t want to lose that connection. In my experience, romance came and went. Attraction came and went. Yes, we spent a lot of time together. And technically, we were exclusive. But I didn’t want to put a label on it, something that would create expectations and lead us to hate each other when we couldn’t live up to them.

I was smarter than that; I wouldn’t let us fall into that trap.

Luc chose that moment to catch my eye and wink, which thrilled me—and made me feel guilty at the same time.

He looked over the small group and clapped his hands to get our attention. Not that that was necessary. His audience consisted of women clearly intrigued by the two bare-chested athletes standing before us, barefoot and ready to rumble. Who wouldn’t pay attention to that?

“Good evening, my minions,” he said, looking us over. “Tonight we’re going to talk evasive maneuvers. Escaping from enemies in hand-to-hand combat, as opposed to trying to get out of House patrol duty on the basis of ‘fang ache.’” He actually used air quotes. He also looked directly at me, because I’d been the one who’d tried the excuse.

Vampires had quick healing abilities, which explained why I’d been freezing my petite ass off on patrol a few minutes later.

“Now, it’s crucial to remember that evasive maneuvers—getting out of a grapple, breaking a hold—are all about physics. Using your opponent’s body weight and weak spots to your advantage.”

“And if that fails, just knee him in the grapes,” Kelley muttered. I bit back a chortle, but not very well. Ethan didn’t seem to mind.

“A time-tested strategy,” Luc said. “And if an enemy’s attacked you, he’s given up any complaint about the sanctity of his grapes.”

“The human body has various and sundry pressure points,” Luc said, raising his hand to gesture, but pausing in mid-motion, his eyes on the door.

We all glanced back and saw a girl in the doorway.

She wore jeans, a Loyola sweatshirt, and a dark gray messenger bag slung diagonally across her body. She was tall and sturdily built, with long blond hair, pale coloring, no makeup—and absolutely no need for it.

I was so surprised to see a human in the doorway that it took a moment to peg her as family.

One thought on ““High Stakes” / KICKING IT – The Teaser”