The first volume of the Dark Elite novels, featuring both Firespell and Hexbound. 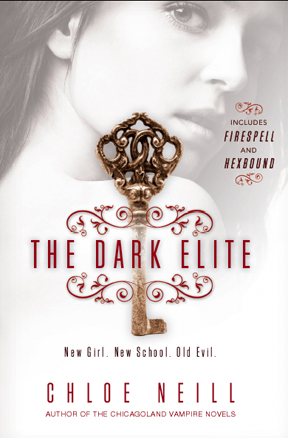 As the new girl at the elite St. Sophia’s boarding school, Lily Parker thinks her classmates are the most monstrous things she’ll have to face…

When Lily’s guardians decided to send her away to a fancy boarding school in Chicago, she was shocked. So was St. Sophia’s. Lily’s ultra-rich brat pack classmates think Lily should be the punchline to every joke, and on top of that, she’s hearing strange noises and seeing bizarre things in the shadows of the creepy building.

The only thing keeping her sane is her roommate, Scout, but even Scout’s a little weird—she keeps disappearing late at night and won’t tell Lily where she’s been. But when a prank leaves Lily trapped in the catacombs beneath the school, Lily finds Scout running from a real monster.

Scout’s a member of a splinter group of rebel teens with unique magical talents, who’ve sworn to protect the city against demons, vampires, and Reapers, magic users who’ve been corrupted by their power. And when Lily finds herself in the line of firespell, Scout tells her the truth about her secret life, even though Lily has no powers of her own—at least none that she’s discovered yet…

Lily Parker is new to St. Sophia’s School for Girls, but she’s already learned that magic can be your best friend…or your worst enemy.

They say absolute power corrupts absolutely. Turns out, even a little magic can turn you to the dark side. That’s why Lily has to learn how to control her newly discovered paranormal abilities, on top of avoiding the snobs who think they run her school, nursing a crush on a cute sophomore with a big, werewolf-y secret, and fighting the good fight with her best friend Scout as they take on Chicago’s nastiest nightlife—including the tainted magic users known as Reapers.

Then Lily’s invited to a private meeting with Sebastian. He’s hot, powerful, and offering to help her harness the magic flowing in her veins in a way no one else can. He’s also a Reaper. Lily can’t hide her suspicions. But she’ll soon find out that the line between good and evil isn’t always clear…

Order THE DARK ELITE from your favorite bookseller: