I’ve become a big believer in “fake it until you make it,” and the realization I’ve had over the last few weeks is no exception.

I used to vent a lot about writing, mostly out of fear that I’d run up against (another) deadline and I wouldn’t be able to meet it.

I made a vow to complain less. And weirdly enough, once I did, I found I dreaded writing less, too. I’m not saying writing is necessarily any easier, but once I stopped complaining about it, it stopped being scary. I decided not to complain, and I stopped having things to complain about. 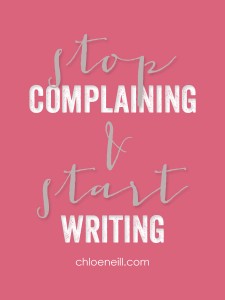