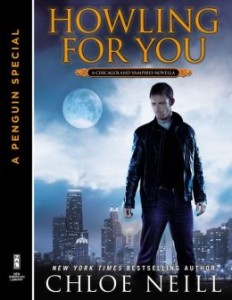 Tension and magic filled the air like invisible smoke, swirling around us with the weight of ancient mysteries. We stared at each other across the small table like foes across a battlefield, weapons honed and at the ready.

But we weren’t enemies.

We just weren’t anything else, either, exactly.

“Are you going to play sometime tonight?” he said. “I mean, if you’re scared, I can give you a little more time.”

“You can’t rush genius,” I said, looking over the fan of cards in my hand at the man who sat across from me.

He was tall and lean with light brown hair long enough to tuck behind his ears or flop into his eyes. His eyes, blue and usually glazed with happiness, smiled back at me. He looked young—fresh-faced and eager—but he had the skills of a warrior and the heart of a tiger. Quite literally.

Jeff Christopher was a shape-shifter and a member of my family’s Pack, the North American Central.

I crossed one leg over the other, my skirt, tights, and dark boots not doing nearly enough to combat the chill in the air. Little Red, the bar where we played cards, was much beloved by the North American Central Pack. But it was old, dingy, and exceedingly cold.

Tonight we were nearly alone, except for my aunt Berna, who stood behind the bar furtively—or so she thought—reading Twilight for the fourteenth time, and the wail of Robert Johnson on the jukebox across the room. But the sun had barely set. Soon enough, more of the city’s shape-shifters would fill the bar with leather, magic, and muscle.

I pulled the four of clubs from my hand and dropped it onto the first of three piles of cards on the table. Jeff glanced at it, then looked at me with calculation.

“Your manly ego doesn’t care as long as I don’t beat you at ‘Jakob’s Quest.’ ” That was his favorite video game. He was a master at it, as he was with most things related to tech.

“Twelve to eight,” I said, biting back a smile. And he wouldn’t make it to nine, given the cards in my hand. “But nice try.”

He snorted, picked up the four, and stuffed it into his deck, then debated which card to give up. If he was picking up a four—a basically useless card—he must not have many options.

Jeff made his decision, dropping a three onto the table. It was a good choice; threes were even more useless than fours. But it still wouldn’t be enough.

And now, I thought, it’s time to pull the trigger and put him out of his misery.

I slid a card from my hand, and placed it on the middle of the three piles with a snap of its corner.

“I call the crown,” I said with a grin, the ace of diamonds shining victoriously.

Shock flashed in his eyes; he hadn’t known I held the ace—much less the ace of diamonds, the penultimate card in Call the Crown, a favorite game of the NAC.

Jeff looked up at me again, smile blooming. “I was sure that thing was in the handmaiden deck.”

“It was. I pulled it in the third round.”

His eyes brightened with amusement. He had such an innocently handsome face, but it belied his strength and passion. Like me, he was fiercely loyal to the Pack.

I was Fallon, the only daughter in the Keene family. Gabriel, the oldest, was Apex of the Pack. I was second oldest, and I was followed in age (and alphabet, because my mother had had a weird sense of humor) by Eli, Derek, Christopher, and Ben. Adam had once been the baby, but he’d betrayed Gabriel, the family, and the Pack. He was no longer a Keene.

If anything happened to Gabriel, I was next in line for the crown. That made me the first possible female Apex in the history of the North American Central. Technically, Gabriel’s son, Connor, was the heir apparent. But he wasn’t even a year old yet, and control of the Pack couldn’t pass to an infant. For now, that made me the runner up.

It also made me the biggest shape-shifting prize in the country.

I put the rest of my cards on the table and gathered up my winnings. The tabletop, one of ten or fifteen around us, was etched with time and sticky with decades of beer and whiskey. It took two passes to collect the quarters we’d anted.

“And that makes thirteen,” I said, sliding them into my jacket pocket.

He’d meant the cards . . . and us.  The game in which we’d both been pawns. My stomach tightened.

“I’m sorry,” he said, reaching over and putting a hand over mine. He must have sensed my dismay.

The contact sent a jolt of magic and emotion through my body, that sense of belonging and familiarity that Jeff Christopher triggered with every touch and heartrending smile.

But he wasn’t for me. And that’s what it all came down to.

I pulled back my hand, glanced at my watch. “No worries. But I should be going.”

He tried for a smile, but it wasn’t convincing. “Are you going to turn into a pumpkin?”

“I have to meet someone,” I said, and those few words were enough to make the cheer in his eyes fade away.

His doubt only lasted a moment; his eyes steeled with determination, and he settled them on me. “Someone?” he asked, but he didn’t wait for me to answer. “A potential mate, you mean.”

The Pack believed every Apex needed a companion, a man or woman strong enough to help the Apex hold the Pack. Since I could one day be that Apex, it fell to my family to identify potential mates. A doomsday plan in dating form.

Brains and brawn were popular traits, but they weren’t the only qualifications. Each family of shape-shifters took a specific animal form. The Keenes were wolves, the same form as the first known shape-shifters, Romulus and Remus, and thus the most prestigious. Wolves were the First Animals of the First Pack.

The shifting was magical, but the form was all about genetics. And that’s what it really came down to.

Jeff was a tiger.

Pack protocol—Pack tradition—said shifters who transformed into different animals shouldn’t be together. Sure, some people ignored the rules. But those people weren’t members of the Apex’s family, and they certainly weren’t second in line to the throne.  I didn’t have the luxury of rebellion.

Gabe and Jeff had been friends for some time. I’d met him a few months ago.  Gabe trusted and respected Jeff, who worked with Chuck Merit, a former cop who’d been hired by a former mayor to help supernaturals in Chicago. Chuck Merit’s agency  was no longer official, but Jeff and his sorcerer colleague, Catcher Bell, still volunteered to solve supernatural dilemmas.

Gabe hadn’t stopped our friendship or complained about the time we spent together, believing we’d drift apart eventually. And as each season passed, the number of potentials Gabe trotted in front of me increased. Jeff was good people. But there were rules.

“The price of Jeff Christopher is too high,” Gabriel was fond of saying. “You cannot have him and the Pack both.”

Jeff knew about the tradition; every shape-shifter did. I think he’d hoped Gabriel would change his mind, or the Pack would. That hadn’t happened.  But cold, hard facts hadn’t done anything to diminish the fiery spark between us.

“Don’t go,” he said, slipping from his chair across the table to the one beside mine. His unique scent moved with him—the deep and heady aromas of jungle and his warm and velvety cologne. So did his magic. It was usually bright and almost cheerful, shining like ripples of sunlight across water. But the mood had darkened, and so had his magic, the power that electrified the air like the moment before a storm.

He touched my hand again, sending a shock of magic up my spine. I fought hard against the promise of it. Our relationship hadn’t been exactly platonic, but there were lines we hadn’t crossed.

“It’s a lame tradition. And I’ll tell that to Gabe’s face.” His expression was fierce, but I knew better. Jeff Christopher was as loyal as they came.

“It’s the right thing to do,” I said, but even I could hear the quiet whisper of doubt in my voice.

He reached up to brush a lock of my wavy hair behind my ear. “You’re not just a Keene. You’re allowed to be Fallon, too.”

Magic blossomed between us, an invisible arc that enveloped us both, sending goose bumps along my arms.

I swallowed down a bolt of lust. I pushed down the obvious interest from the wolf that prowled inside me, felt her keen disappointment when I stood up and pushed back my chair, which squealed in protest against the sticky and stained linoleum floor. The wolf didn’t care about Jeff Christopher’s form. That he was magic—ferocious and male—was enough for her.

There was no denying Jeff Christopher and I had good magic. But magic didn’t win every battle. Sometimes family had to win, because it was the only victory a girl could afford.

“They’re counting on me,” I said, avoiding his eyes, afraid he’d see my doubts, even though I’d pushed them as far down into my gut as possible. “And you know the other option.”

Abdication. I could have Jeff Christopher if I gave up my claim to the Pack, my spot in the line of succession. But I’d also be giving up my family, rejecting the training and education I’d received as a potential Apex.

I cared about Jeff, but he wasn’t for me. We weren’t for each other. It might have been one of the great tragedies of my universe, but that didn’t make it any less true.

“One of these days I’m going to start taking your rejections personally.” Jeff’s voice was confident, but there was pain in his eyes. Still, he put up a good front. “Today’s not that day. I’ll see you, Fallon.”

His voice drew my gaze back, and the promise in his eyes was unmistakable.

Order HOWLING FOR YOU from Amazon, Barnes & Noble, iBooks, or Kobo!