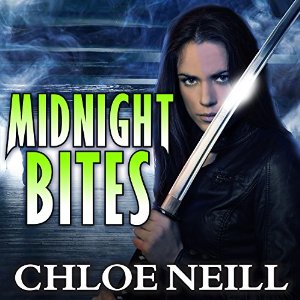 MIDNIGHT BITES is an audiobook which contains the Chicagoland Vampires stories HOWLING FOR YOU and LUCKY BREAK.

In Howling for You, Jeff Christopher is a shapeshifter and ally of Chicago’s Cadogan House of Vampires. For a long time, Jeff only had eyes for the beautiful Fallon Keene. Unfortunately, she is the only sister of the lethal North American Central Pack Apex Gabriel Keene. But fate takes a hand when the Pack’s totem is stolen, and Fallon enlists Jeff’s help to retrieve it before the Pack is thrown into chaos. Can she and Jeff find the totem, and restore order, before it’s too late? And will Jeff finally be able to prove himself to the only person he truly loves?

In Lucky Break, Merit and Ethan are in desperate need of some alone time, but their attempt at a romantic getaway is quickly interrupted when one of Ethan’s vampire friends shows up at their door—covered in blood and accused of killing her shifter husband. Now, Merit and Ethan must put their passion on pause to figure out who’s really responsible for the murder before all hell breaks loose…