Someone politely pointed out that I could probably wrangle up a second TWICE BITTEN ARC pretty easily for the ARC contest.

Sooooo, instead of giving away just one TWICE BITTEN ARC, I’m going to give away TWO.

Two entire TWICE BITTEN GIFT PACKS, that is! (But only because y’all are awesome. And I can’t believe how many folks have already entered the contest! Y’all rock!)

The above-referenced prize packs are assembled and ready to go. Need proof? 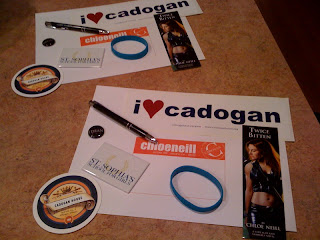 What’s inside? A TWICE BITTEN bookmark, a St. Sophia’s magnet (from the FIRESPELL world), a Chicagoland Vampires pen, an Ethan or Morgan flair button, a Cadogan House cardstock coaster, and I HEART CADOGAN bumper sticker, and an “I’ve Been Twice Bitten!” silicone wristband.
TO ENTER: Jump back to the original ARC contest post and follow the directions there. And don’t worry–even if you don’t win this time, there will be plenty more chances to win some of that swag. That’s what the blog tour is for!
Good luck!

11 thoughts on “NOW WITH MORE COWBELL!”