This week, I’ve asked some amazing urban fantasy and paranormal romance authors to participate in Show Your Work week and share their processes with you.  Today, please welcome Vicki Pettersson!

Vicki Pettersson is the New York Times bestselling author of the Signs of the Zodiac Urban Fantasy series, and the Celestial Blues ‘para-noir’ trilogy, both set in her home town of Las Vegas. Though she’ll always consider Sin City her home, she now divides her time between Vegas and Dallas, where she’s learning to like good Tex-Mex (easy) and the Dallas Cowboys (easier than you’d think). You can learn more about Vicki at her website: http://www.vickipettersson.com/

I find it hard to talk about my writing process because I don’t feel I have one … or not just one, anyway. I use different tools at different times in the writing of a novel, depending on where I am in the work. 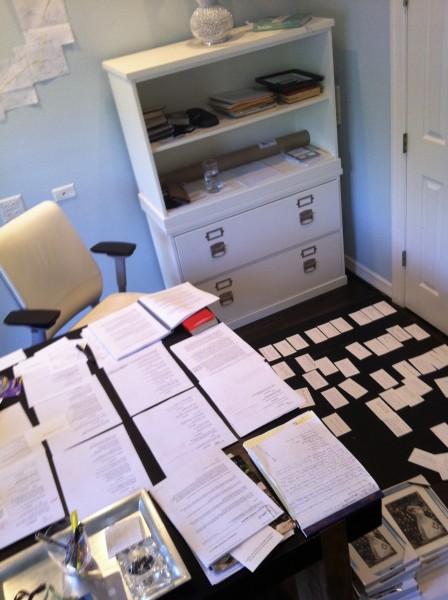 I’ll also listen to what everyone else has to say – 10 steps to plotting, five tips to writing faster, three ways to kickstart the muse – and try to apply all of to my current WiP. Like, at the same time. I don’t know. I’m either manic or obsessive-compulsive or lack any real self-confidence in or about my writing life. All of which is likely true, but the greater truth is that I simply love to learn. Trying on difference processes is like playtime, and derives from the same need that drives me to write: the ability to step into someone else’s shoes. I then stand in front of my mental mirror, bevel this way and that, take note of the fit and if it’s the right shoe (tool) for this journey and then use or discard it as needed. These days, ten novels and a handful of shorts into my career, I switch it up faster than a Kardashian on a shopping spree.

So I’m not sure how helpful explaining this chaos to anyone else might be, but I’ve noted that I do have a few tried-and-true tricks that I keep in my writer’s bag, and which I use every time. They are: 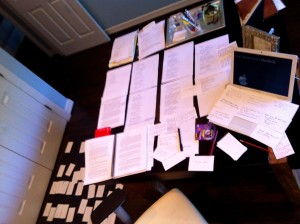 1) Plotting board. Yep, the notecards and/or post-its and the three-act structure (divided into four parts). I love structure. I mean, I love it like Sherlock loves a mystery. So the first thing I do when I’m trying to turn some shiny new ephemeral idea into an actual book is plot it out. If you need help with this, Alexandra Sokoloff’s Screenwriting Tricks for Authors is a great place to start. It prompts questions about premise and theme and commercial fiction pacing that send my mind reeling in a hundred new directions. I’ll then use post-its to write down every single one of them – the craziest, the stupidest, it doesn’t matter. The idea is to empty myself out. It also allows me to try and nail down the major turning points in a novel: first act climax, midpoint, second act climax, third. The best of these ideas then get transferred to notecards and then to a very simple outline which I use in …

2) Scrivener. Guys, I’ve used this software to write eight books now, and I’ve never even bothered watching a tutorial. It’s intuitive, it helps me corral all of my research – photos, articles, journal (I’ll get to that later) and the book itself, chaptered – in one place. I love it. (Also, I hate Word. Like Sherlock hates Moriarty, just to continue that analogy.) 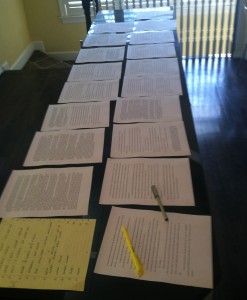 3) Re-plot. Okay, scribble, scribble, scribble … go for 2K a day when I’m in first draft mode, work from the outline that is ever shifting and changing … and no matter what I always, always, end up having to re-outline every hundred pages. That seems to be the place where I get lost in my story. I’m too close to the page, and I forget what I’ve written, what I’ve discarded and why, and it’s a mess. (My husband once walked into my office, saw the notecards and stickies plastered to the desk and walls and floor and asked what was going on. “I’m tangled up in my mental underwear,” I wailed. “Honey,” he said, “It looks like you’re going commando.”) But at least now I know that this part is coming – it does every time; apparently, it too is a part of my process – so I don’t freak out about it anymore. I just get out my outline again and get to work.

4) Working journal. I learned this from Sue Grafton years ago. (No, I didn’t. I learned it from a Sue Grafton article…I’m just name-dropping.) A working journal isn’t a diary. It’s the date and day, a quick download of what’s going on in your life (so you can look back on a given day’s wordcount and say, “Oh, yeah. I was sick that day, that’s why it took four hours to get five words” and know what’s going on.) So that’s nothing more than a few sentences. (I’ll put my to-do list up there too so I remember what I’m supposed to be doing in my real life. It usually consists of: work out, post office, don’t forget kid at school. Because I’ve done that before.) After that, though, I start talking in print, to myself, about the story. ‘So I’m stuck on this chapter and don’t know what happens next because Joanna Archer just lost all her powers and she doesn’t even know what comes next so how do *I* know unless she finds that there’s strength in weakness and …’ and so on, get it? Suddenly, I’m five hundred words into a new scene, dialogue and all, without even knowing I flipped a switch. Try it.  [Love this idea, and stealing it. — Chloe] 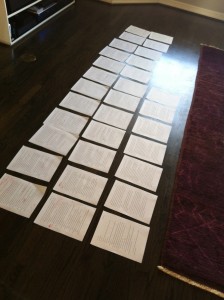 5) Print it out. I have to be able to “see” a scene, both its beats and its white space, and I can’t do that on the computer. It’s also useful when combining scenes, which I love to do. (It makes me feel so efficient!) So I lay the pages out on the counter or floor and, going as quickly as I can, move around text and create the turning points and transitions. However, I rarely write the whole thing out. My handwriting has deteriorated so badly that once I have a feel for the shape of the scene I’ll usually run back to the computer to transcribe the chicken scratch before I lose my thought completely.
So these are the mainstays to my creative process. There are others (bubble charts to make visual connections, leaving [brackets] when you can’t think of a particular word but don’t want to stop the flow to look it up, writing in longhand to shake up the brain). The thing is, when you’re open to everything as I am, you have to have some touchstones to return to, and these are mine.

I seriously doubt any of that was helpful in the least, but blame Chloe. She asked.

Vicki is the author of the Celestial Blues and Signs of the Zodiac Series.

Celestial Blues: Meet Griffin Shaw. Fallen angel and former P.I. forced to return to the city where he and his wife were murdered fifty years before. He needs some modern-day know-how if he’s going to get a shot at solving his own death.

Here are more ways to acquaint yourself with Vicki and her work:

Thanks so much to Vicki for joining us today!