This week, I’ve asked some amazing urban fantasy and paranormal romance authors to participate in Show Your Work week and share their processes with you.  Today, please welcome Yasmine Galenorn!

New York Times, Publishers Weekly, and USA Today bestselling author Yasmine Galenorn writes urban fantasy for Berkley: both the Otherworld Series and the Indigo Court Series, and will add a spinoff of Otherworld—the Fly By Night Series—after the last Indigo Court book is released in 2014.  In the past, she wrote mysteries for Berkley Prime Crime, and nonfiction metaphysical books.  Yasmine has been in the Craft for 33+ years, is a shamanic witch, and describes her life as a blend of teacups and tattoos. 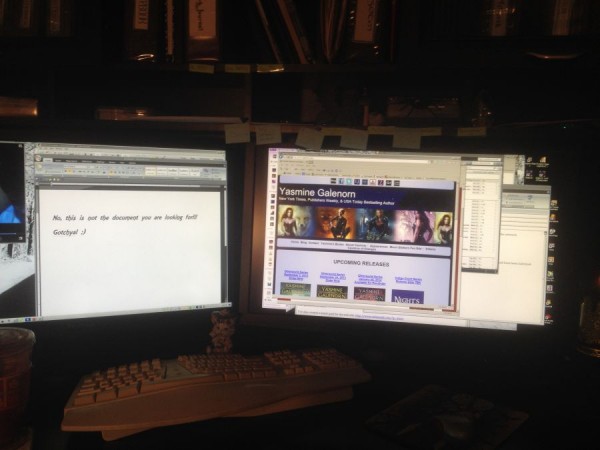 I write on my computer—my tendonitis hurts too much for me to write by hand anymore, and writing 3+ books a year? I really don’t have time to linger over longhand. But I love blank books and collect them. Like most authors, I also collect pens. But my most recent purchase that has made me such a happy camper, is that I switched to a dual monitor system. I multitask a lot. Now, I can watch a show in the background, have multiple browsers open, several documents I’m prowling through, and not have everything get lost in the mire. I made this decision after accidentally closing the wrong document without saving it (because I thought it was one I didn’t have to), and losing a chapter of work. 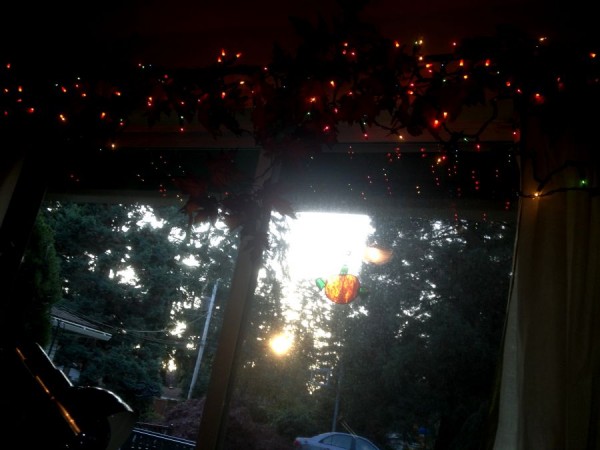 And of course, I need my mascot Miss Kitty with me, my pens and Post-Its, and my ever sparkly lights that make me feel happier on those late nights I’m stuck in my office working. There are a lot of other things on my desk, but I’d spend an hour waxing rhapsodic over them if I let myself. Like most writers, I’m intoxicated by office supplies and gadgets.

So what do you keep with you at your desk? Any special toys that make you work better just because they’re around?

Yasmine’s next release, CRIMSON VEIL, will be the 15th Otherworld novel, and it hits the shelves January 28, 2014. 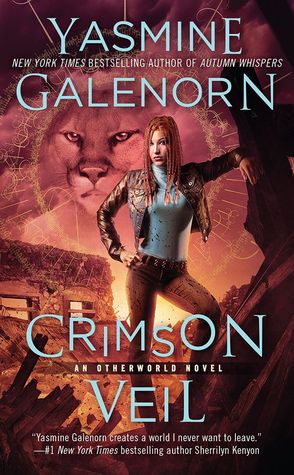 We’re the D’Artigo sisters: savvy half-human, half-Fae ex-operatives for the Otherworld Intelligence Agency. My sister Camille is a wicked good witch with three gorgeous husbands. Delilah is a two-faced werecat and a Death Maiden. And me? I’m Menolly, a vampire married to a scorching hot werepuma. And right now, we’re facing enemies on all sides…

It’s been a long and devastating week. Back in Otherworld, war has decimated the elfin city of Elqaneve, our father has gone missing, and Shadow Wing has managed to obtain another spirit seal. On the home front, somebody burned down my bar–the Wayfarer–killing eight people, including a friend.

To make matters worse, we still haven’t found a way to stop Lowestar Radcliff–the daemon in charge of a supernatural corporate power grab. He’s attempting to awaken Suvika, the lord of vice and corrupt businessmen, and we have to stop him. Our enemies are closing in on all sides, and this time, there’s no place to hide…

The sky was clear for once, though rain was forecast before morning. The moon glimmered, her faint sliver shining down over the cemetery. Soon she would be new, dark, and hiding her face. A steady flurry of gusts rocked the trees, the silhouettes of their boughs shaking like tall sentinels sounding the alarm. It was the perfect night for a funeral. A funeral none of us wanted to be at.

We were gathered at the Seryph Point Cemetery, around the open grave. A small group we were, not many there to send off our friend to the afterlife. There was me, Menolly, and my wife Nerissa. My sisters Camille and Delilah stood beside us. Derrick Means was here-my bartender. And Tavah, Digger, and Kendra-all from the Wayfarer. Chase had joined us, as did Mallen. We had asked our men to stay home, to watch over the house. As I said, we were just a small group, but everyone here had cared, everyone was here because they wanted to be.

Here are more ways to acquaint yourself with Yasmine and her work:

Every Monday, on Facebook, get a snippet from Yasmine’s upcoming novel. And Fridays, Yasmine offers you Fridays After Dark, with a short, unpublished scene that couldn’t make its way into the books!

Thanks so much to Yasmine for joining us today!