Happy book birthday to Luc and Lindsey!  Their very own short story is now on shelves. 🙂

KICKING IT, which features “High Stakes,” the Luc and Lindsey short, was named a TOP PICK! by RT Book Reviews, which had this to say:

Fans of many of today’s top urban fantasy series will be overjoyed with this anthology, which features some of the most well-known, kick-ass heroines — along with some pretty fabulous footwear. All of the contributing authors bring their A-Games to these stories, adding fresh elements to their worlds and introducing new characters into the spotlight to spice up their series. Highlights of this brilliant anthology include: Chloe Neill’s Cadogen vampire guards Lindsey and Luc in a century-long battle for revenge.

Here’s a teaser to whet your appetite: 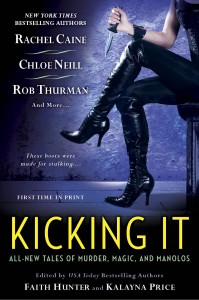 But it wasn’t that simple.

He smiled cockily down at me. “I’m not afraid of your issues, Linds.”

“I don’t have issues,” I said. “And we need to get downstairs. Maybe we should talk about this later.”

“You’re a walking issue,” Luc said, nipping at my earlobe before releasing me. “Fortunately, you’re also a hottie and a very good guard.”

He shrugged carelessly, obviously trying to rile me up. “You’re all right.” He walked to the door, opened it, and gestured into the hallway. “Let’s go.”

Click here to read more of the teaser, or buy KICKING IT today at Amazon | Barnes & Noble | Books-A-Million | IndieBound | iTunes

And you can still enter to win Luclicious goodies in the contest below.